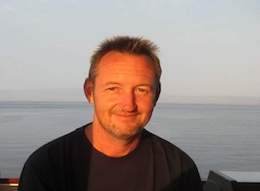 John, English, has been working in the marine industry for the last 15 years. He is a qualified mechanical engineer who began his working career in the UK as a diesel mechanic and truck driver. Once off the road, after his early days, John had his own business for many years with a large workshop specialized in diesel mechanics and engineering.

In the early 2000s John qualified as a PADI Instructor and made a sea change moving to Asia. He has worked as a cruise director, dive instructor plus maintenance and operations manager within the diving and yachting industry. Most notably John was the head of operations / fleet engineer for Siren Fleet for 5.5 years. John joined Segara Marine in 2017 and brings a very specific and important skill set to the projects of the company. 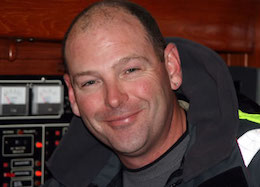 Andrew, Australian, has been in the marine industry for over 30 years and is the Marine Surveyor of Segara Marine. Starting as a deckhand/ divemaster in Australia at 19 he has worked his way thru the ranks during his career. He has worked as a yacht captain, dive instructor, cruise director, yacht broker, dealership principal, construction project manager, consultant and marine surveyor. 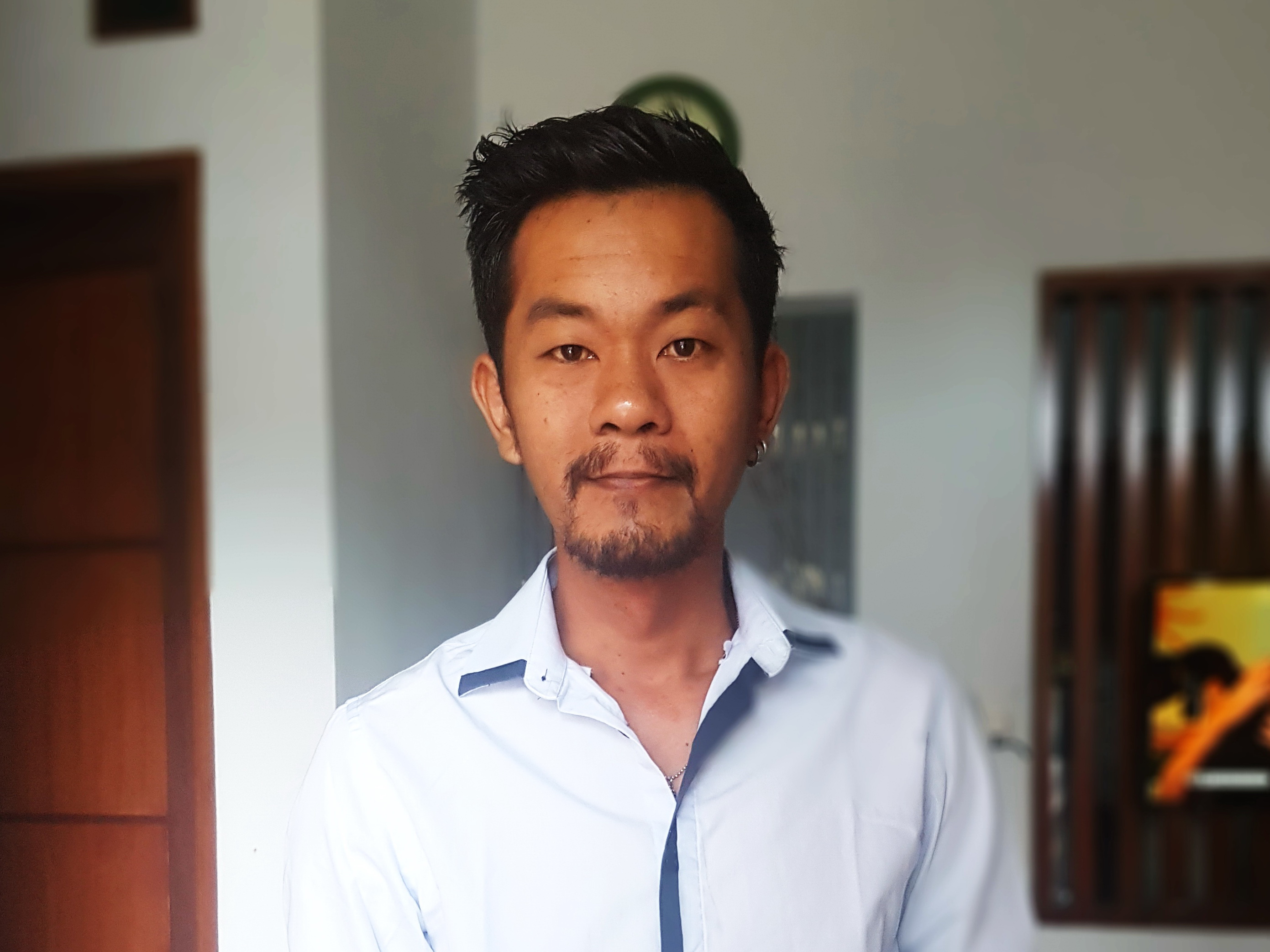 Rudy, Indonesian, affectionately known as “The Rudstar” works in logistics and operations for Segara Marine. He is a true jack of all trades being able to switch between cruise directing, dry dock, construction, maintenance, diving and, navigating the Indonesian administration challenges. He is a very key player within the projects Segara Marine undertakes.

Rudy has considerable hospitality industry and management experience and over 10 years time served in the marine Industry. He was involved in the refit of Salila in Jakarta and worked with Andrew at Waow Charters for 7 years building and operating a 60 meter wooden sailing ship. Rudy’s ability to switch modes is key to the every changing and sometimes complex maritime world of Indonesia. 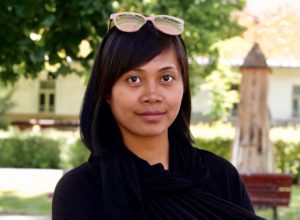 Erna, Indonesian, has been working in the administration of charter boats and diving businesses for the last 6 years. Prior to this she worked in I.T, notably for Apple for a period of time. She has information technology, graphic design and administration skills that are very important to the running of a maritime company.

Erna manages the administration side of Segara Marine including accounting, government admin, social media, staff management and port authority regulations. She brings an important organizational presence and ensures that rules, regulations and reporting are up to date to ensure the smooth running of our business, and the businesses we mange for our clients. 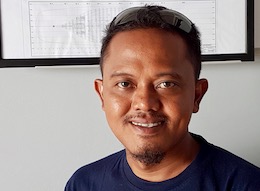 Iwan, Indonesian, has been working in the marine industry for over 10 years and brings with him avery specific skill set to the team at Segara Marine. Beginning his career in hospitality he holds a Diploma in Food Production Management and is a qualified chef. His love of boats saw him head out to sea where he has worked as a chef and as a chef trainer for numerous liveaboards both in Indonesia and abroad. Notably, he worked for a large international liveaboard fleet for 7 years and worked his way up to operations manager, which also included supervising refit and dry dock procedures.

Iwan works in operations within our team, can freelance, fill in or train the chefs, oversees purchasing and budgets, manages day to day logistics and puts his boots back on when its time to hit dry dock. Iwan joined Segara Marine in January 2018. 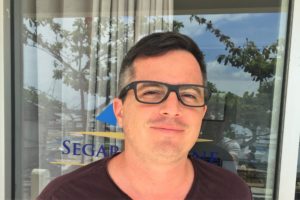 Fabien, French, has been working in the diving and yacht charter industry in Indonesia for the last 10 years. He began his working career in France as a quality control and production manager before beginning his travels. He has vast experience in regulatory compliance, systems management and quality control.

In 2008 Fabien moved to Indonesia to work as a dive instructor and cruise director within the diving industry. Fabien joined Segara Marine in September 2018 and brings his knowledge of diving, cruising, quality control and process management to his role as “Cruise Manager”. Outside of work he has a young Indonesian family, speaks English, French and Bahasa Indonesia, and enjoys scuba diving, music, travel, and, like all Frenchmen, good wine and cheese. 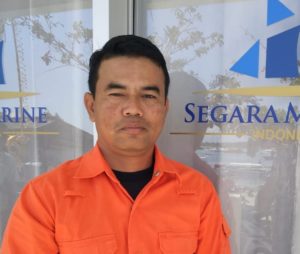 Agustian, Indonesian, respectfully known as, and called “Cap Agus”, has been working in the marine industry for more than 22 years. He began his career as a deckhand on fishing boats, notably for Australian companies working out of West Papua. During his time at sea has climbed the ladder, and deservedly so, until reaching the position of “Pinisi Captain” category ANT 4 back in 2010. He has earned respect captaining some prestigious vessels between 30 and 60 meters within the tourism industry.
Originally from West Java, he now shares his time between Bali and Manado, the later where his wife originates from. Passionate about the ocean, he has also had the opportunity during all his years of navigation and sea time, to scuba dive in a large percentage of the sites offered by the beautiful Indonesian Archipelago. Agustian joined the Segara Marine team in January 2018 and brings all his experience and expertise as a Captain, but also importantly his ability to train and support the Captains on the boats, plus his engineering knowledge. During his temporary rotations on our managed vessels he shares his experience and gives guidance to all the crews. He is also a reference for the security regulations possessing both theoretical and practical experience, and, has contacts with the diverse administrative departments including the port captains and agents throughout Indonesia. 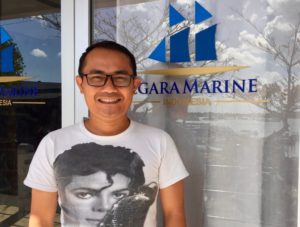 Wayan Diarta (Yandi), Indonesian, from Karangasem Bali, a.ka. “The Bean Counting Master”, graduated from  Udayana University majoring in Finance & Banking. He also has a bachelors degree in accounting from Udayana University. Yandi has been working as an accountant and advisor in the hospitality industry and management services for the last 10 years. He joined the team at Segara Marine in April 2019 as the Financial Controller handling accounting for our managed vessels. Outside of work Yandi lives in Denpasar with his wife and two children and loves playing indoor football. We haven’t got him to wear shorts to work yet, but we are working on it.